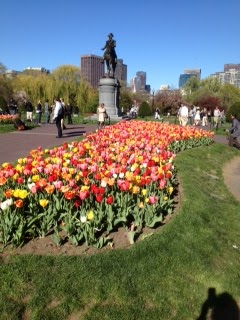 It was a heartbreakingly beautiful day.  I work at Newton-Wellesley Hospital, and as I live in Western Massachusetts, I had not yet had reason to come in to Boston.

Though I grew up in New York City, I have felt a strong attachment to Boston since I first lived here over 20 years ago, on what my husband fondly refers to as "far out" (Farrar) Street, that I never felt for New York.

I sat at the Starbucks on the corner of Charles and Beacon, working on my new book before heading to the State House for a  meeting of Representative Ellen Story's Postpartum Depression Commission. I had a bit of extra time, so I set out for a walk on the Common.

"Can I cry, walking alone in the middle all this life?" "Can I not?" My brain conversed in this way with my heart as I fought back tears. They did not come. I continued my walk, drawn to Boylston Street. I stopped to photograph some tulips. I saw a runner sitting on a bench tying her shoes. "Are you OK? "I wanted to ask.

I walked down Boylston to the memorial that has appeared, taking time to look at a huge card filled with signatures and words of gratitude addressed to Massachusetts General Hospital. It was getting late, so I headed back towards the State House.

Once again at the corner of Beacon and Charles, I stopped. I looked out across the Common at the magnificent burst of color against the perfect blue sky. I thought of a trip in April, 16 years earlier, with my then 2-year-old daughter.  My husband and I sat among the flowers in this same spot in the brilliant sunshine. A complex mix of feelings were brewing- anger at the loss of innocence, love for this beautiful city, and deep sadness, both for the people whose lives were directly impacted, and for the city as a whole. Then I let the tears come- enough to allow myself to know that this was not just an ordinary day of work.

I went to my meeting, fully engaged in the task at hand. Walking down the stone steps into the light of dusk, I was joined by a young man who had been at the meeting who I did not know. As I again looked out over the Common, I wanted to say, "This is my first time here since the bombing." Instead we simply smiled at each other. "Have a nice evening," he said as he walked the other way. "You too," I replied.
Posted by Claudia M. Gold, MD at Thursday, May 02, 2013